My second cousin alerted me to this -- thanks, Keith!

Just a quick heads up about Doris Dwyer's Chautauqua presentation at the Firehouse Arts Center in Pleasanton, Calif., at 7:00 PM tonight, July 8, 2014. Doris has been portraying  of Margaret Breen for a number of years and is a well informed, interesting performer. Wish I could go! For more details, see this article.

Did I mention it's tonight?

Posted by Kristin Johnson at 7:00 AM No comments:


Recently I've been corresponding with a fifth-generation Californian, Cathryn Fairlee of Cotati, who has ancestors who arrived in California in the 1850s on both sides of her family. (One settled in Marysville -- named after Donner Party survivor Mary Murphy Covillaud; the other was buried in the cemetery of Mission Dolores in San Francisco -- as was Mary's brother-in-law, survivor William Foster. Just can't get away from the Donner Party associations!) Cathryn's a professional storyteller and will present a "Chautauqua" telling the Donner Party story as Virginia Reed at the Veteran’s Hall, 10214 High Street, Truckee, on June 27 at 7:00 pm. ($10 donation.)

Parenthetical digression: this use of  "Chautauqua" threw me for a loop when I first heard it some time ago; it brought to mind the summer camps and traveling shows that provided education and entertainment for rural Americans in the late 1800s and early 1900s. More recently, "Chautauqua" has also come to mean a performance by someone who adopts the persona and garb of a historical character to tell his or her story.

Posted by Kristin Johnson at 8:13 AM No comments:

It's My Bloggy and I'll Crow If I Want To, Part II


Reader Chet's recent comment on my post about "Donner Party Cannibalism: Did They or Didn't They?" reminded me of some news I meant to share: Several weeks ago I learned that the article is a finalist (runner up) for the Western Writers of American Spur Award for best short nonfiction for 2014. What a surprise! I had no clue that it had even been nominated. Naturally, this is exciting news, but despite my elation, the article is still unsatisfactory and I'm drafting a more detailed study. It may turn into a book by the time I'm through... Will keep you posted.


The latest issue of WildWest magazine to hit the stands might interest readers of this blog -- it features an article called "Donner Party Cannibalism: Did They or Didn't They?" by some bimbo named Kristin Johnson (that would be Moi). How did that happen? Well... It was work. A lot of hard work. The hardest thing I've had to write so far, because, despite all the revision, it's still much less than satisfactory. There's only so much you can shoehorn into 3,700 words. Special thanks to Greg Lalire at WildWest, who put up with my angst and vaporings while (apparently) remaining relatively sane.

George R. Stewart wrote long ago that, in a sense, cannibalism is actually a minor part of the Donner saga, and he was right. Once you get over the initial horror and look at the larger picture, cannibalism was the culmination of a lengthy series of events and, for almost all of the emigrants compelled to it, lasted a relatively short period of time.

I've downplayed the cannibalism for years because I just don't find it all that interesting; once the shock wears off, there's nothing to sink your teeth into, so to speak. It's the human drama (who were these people? what happened to them afterward?) -- and the historical research (how do we know what we think we know? are there any more sources out there?) that have engrossed me.  However, over the last several years the  notion that Donner Party cannibalism is a myth seems to have gained credence in some segments of the general public, especially the online crowd. It's become such an annoyance that when the opportunity arose to confront it, I did.

Most of the information in the article will be old news to attentive readers of this blog, New Light, or An Archaeology of Desperation; what's different is that it pulls data scattered about in many different sources together in one place to make what I believe is a convincing argument. I haven't had any feedback yet, good or bad, but time will tell. Meanwhile, why don't you take a look and tell me what you think?

[Disclaimer: I get no royalties from sales of the magazine and will derive no financial benefit from your purchases, darn it.]


As Donner buffs will recall, John Snyder was the Graves family's teamster who got into a fight with James F. Reed and was stabbed to death. Snyder was buried near where he fell and Reed was banished from the train. There has been some confusion about where the fight and burial took place, but trail historians are agreed that it happened at Iron Point, Nevada.

John Grebenkemper is involved with the Institute for Canine Forensics, which uses Historic Human Remains Detection (HHRD) dogs specially trained to search for the scent of decomposed human remains, which can remain in the soil for centuries. It sounds incredible, but the dogs have had had some remarkable successes and are being used by "cultural resource management firms, archaeologists, American Indian tribes, construction companies, federal, state and local agencies, cemetery preservation foundations and families looking to locate lost family cemeteries," according to the ICF website. Back in 2003 or so, my friend Ken Dunn told me about these animals, I told the archaeologists, and the upshot was that a team of dogs investigated the Alder Creek site before the July 2004 dig -- you can watch a video about it here.

In 2011 John and ICF founder Adela Morris turned to another Donner Party site, John Snyder's grave at Iron Point. To make a long story short, their border collies Kayle and Rhea alerted to human remains scent in one specific area only, in the road at the bottom of the "steep sandy hill." The three of us wrote up the results in "Locating the Grave of John Snyder: Field Research on a Donner Party Death" (Overland Journal 30:3 (Fall 2012), p. 92-108). John and I did the history, and John and Adela wrote about the dogs. We've gotten some nice feedback and it looks like John and Kayle are going to be busy this summer.

However, it also looks like nobody is going to try to dig John up any time soon. As I understand it -- and I hope somebody will let me know if I'm wrong -- archaeological laws prohibit disturbing known or suspected graves without good cause. If the site is threatened by construction, for instance, if remains have been exposed by erosion, or if they turn up as part of a larger dig, that's one thing, but digging up a possible grave just to see if it really is a grave (mere curiosity, in other words) is a different story. On public land, at least, you'd be extremely unlikely to get permission, and there are restrictions with regard private property, too. But never fear, there are other possible Donner Party sites to investigate...

Historic McGlashan site up for grabs 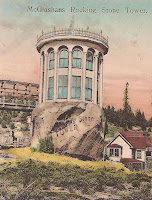 In 1893, newspaper editor, lawyer, and Donner Party historian C. F. McGlashan completed a remarkable building on a hillside in Truckee, California. White, with numerous tall windows and columns all around, the Rocking Stone Tower overlooked the town.

The tower was built was a 30-foot-high boulder with a flat top, at whose center perched a smaller rock (only 16 tons) so perfectly balanced on edge that a slight push would make it move gently, then rock back into place. Worried that the locals who scaled the base and larked about with the rocking stone might unseat it, McGlashan bought the property and built the circular tower, which housed his "museum" -- Donner Party relics, his butterfly collection, Washoe artifacts, and various other curiosities, including the rocking stone itself.

Several years later, he completed a house close to the boulder and attached to the tower by a bridge. The house and tower became a landmark, even appearing in postcards, such as the one the image above is taken from. Until his death in 1931, McGlashan made his home in the "castle" on the hillside. Nearly four years after his passing, however, the house met its own fate. At 3:15 A.M. on October 18, 1934, a watchman discovered the blaze in the kitchen and was seriously burned attempting to douse it. The house burned to the ground, but the tower and its contents emerged unscathed. In 1939, the tower became Truckee's Veterans Hall Memorial Building.

Now the local Powers That Be have determined that the site is "surplus property" and have put it on the chopping block, with no publicity or input from residents. See the Sierra Sun article "Our Turn: Truckee history for sale" for more details about this latest development. For more about McGlashan's home and tower, see Give Me a Mountain Meadow, by M. Nona McGlashan.

Posted by Kristin Johnson at 8:45 AM 3 comments:


On Friday I received a phone call out of the blue from Bill Springer, a fourth great-grandson of Capt. George Donner, to inform me that his brother Don died last month.

Donald Donner Springer, a life-long resident of Springfield, Illinois, was an avid collector of Donnerana. He amassed a quantity of documents and other items related to his family history, gave talks to local historical and genealogical groups, and had a memorial erected to George and Tamzene Donner, along with other relatives whose graves are unknown, in the family plot at Oak Hill Cemetery in Springfield.

When JoAnn Brant Schmidt and I visited Springfield in 1998, Don put us up for a week, took us on a tour of Donner sites, and shared his remarkable knowledge freely. Don and Jo Ann were distant cousins, he being descended from George's son William and she from George's daughter Sarah -- naturally they had a lot to talk about! Don was a hell of a nice guy, friendly, generous, and a great host.

If Don's passing weren't bad enough, Bill also told me that Jo Ann died over a year ago, and her husband of 59 years, Gil Schmidt, passed away in October, less than a year after Jo Ann.

In addition to being sharp, funny, and having a great outlook on life, Jo Ann was an amazing genealogist. She's the one who cleared up the mystery of Sarah Donner (Capt. George Donner's daughter, not sister); found George Donner Sr.'s Revolutionary War service (North Carolina militia, not Continental Army), thus enabling any number of descendants to apply for membership the DAR and SAR; identified George Sr.'s wife Mary (surname Huff, though Jo Ann was always careful to say that while the inference was quite clear, she hadn't yet found any direct documentation); uncovered a collection of documents relating to the Donners back in Kentucky; and much, much more. A lot of information about the Donners in the family trees at Ancestry.com stems from her research, though she's rarely credited. Neither Jo Ann nor I had been working hard on genealogy for a while, so we hadn't been in touch lately, which I very much regret.

I'll try to find something more upbeat to post about next time.


Posted by Kristin Johnson at 11:46 AM No comments: